Uganda developed from the nineteenth century kingdom of Buganda, based along the northern shore of Lake Victoria. In 1894 Buganda was declared a British protectorate, but the country was never fully colonised. Growing self-government through a Legislative and Executive Council led to full independence on 9th October 1962. Milton Obote, leader of the Uganda People's Congress (UPC), was elected Prime Minister. He was overthrown in 1971 by Army Chief of Staff, General Idi Amin, who established a brutal dictatorship. The Asian Community was expelled in 1972 and intellectuals persecuted. Border tension led to an invasion by Tanzania, with support from exiled members of the Ugandan National Liberation Front (UNLF). President Amin was over-thrown and ill-organised elections in 1980 returned Obote's UPC to power.

President Obote's government relied on the support of the army and soon became embroiled in a savage guerrilla war against Mr. Yoweri Museveni's National Resistance Army (NRA), who regarded Obote and his supporters as criminals. Growing dissent between Acholi and the Langi factions within the army resulted in Obote's overthrow by the Acholi, led by General Tito Okello Lutwa. Gen. Okello established a military council, but after a bitter battle in January 1986, the NRA occupied Kampala and Mr. Museveni was installed as President. 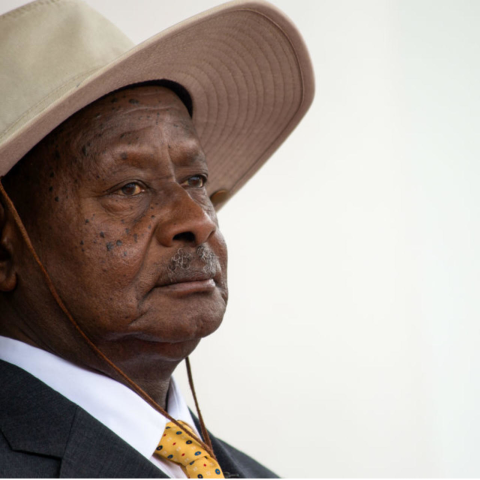 H.E. Yoweri Kaguta Museveni, President of the Republic of Uganda

In 1995, Uganda adopted a new constitution. The Constitution provided for Presidential, Parliamentary and local elections over the next two years, to be held under the existing restrictions on activity by political parties. The elections which followed in May and June 1996, for President and Parliament respectively, were generally free and fair, notwithstanding the ban on party activityA referendum was held in June 2000, which decided to maintain the restrictions. A second referendum was held in 2005 which decided the return to a multiparty system of Government and elections. Uganda's first multi-party elections since 1980 were held on 23rd February 2006. Multiparty Elections have been held every five years since then. Considerable progress has been made in restoring peace across Uganda and in rebuilding infrastructure shattered by civil war.

TRANSLATE with
COPY THE URL BELOW
Back
EMBED THE SNIPPET BELOW IN YOUR SITE
Enable collaborative features and customize widget: Bing Webmaster Portal
Back